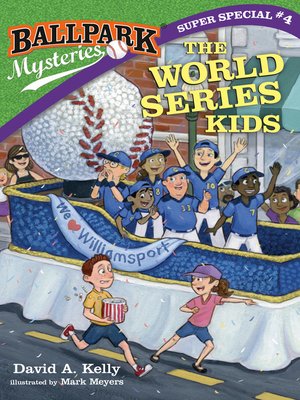 Juvenile FictionJuvenile LiteratureMystery
Batter up! Get ready to watch the kids' baseball team from Cooperstown compete in this Super Special edition of the Ballpark Mysteries—fun, accessible early chapter books that cross baseball action with puzzling whodunits!
Catch a baseball mystery with the World Series Kids!
The kids of Cooperstown made it to the World Series! Technically, Mike and Kate are just there to support their friend Colin and his teammates as they play for the championship. But the competition gets tricky when someone starts trying to sabotage Cooperstown's team—they punch holes in the tires of their bus, and the team's equipment goes missing! Can Mike and Kate find the trickster before it's too late? Or will these shenanigans cost Cooperstown the series?
A longer story, plus bonus back matter with amazing baseball facts, make The World Series Kids a truly Super Special addition to the Ballpark Mysteries.
Juvenile FictionJuvenile LiteratureMystery

DAVID A. KELLY has written a picture book and chapter books for young readers and has written for many newspapers and magazines. He lives in Newton, Massachusetts. You can learn more about the series at ballparkmysteries.com and look for David Kel...

More about David A. Kelly
The World Series Kids
Copy and paste the code into your website.
New here? Learn how to read digital books for free