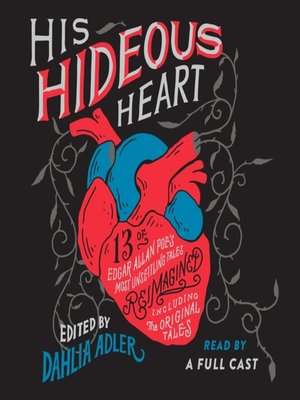 "His Hideous Heart is an audiobook dream. Half of the stories are read by their authors and the other half are read by professional narrators; all are delightful and, of course, haunting." — Paste
Thirteen of YA's most celebrated names reimagine Edgar Allan Poe's most surprising, unsettling, and popular tales for a new generation.
Edgar Allan Poe may be a hundred and fifty years beyond this world, but the themes of his beloved works have much in common with modern young adult fiction. Whether the stories are familiar or discovered for the first time, listeners will revel in both Edgar Allan Poe's classic tales, and in the 13 unique and unforgettable ways that they've been brought to life.
Contributors include Dahlia Adler (reimagining "Ligeia"), Kendare Blake ("Metzengerstein"), Rin Chupeco ("The Murders in the Rue Morgue"), Lamar Giles ("The Oval Portrait"), Tessa Gratton ("Annabel Lee"), Tiffany D. Jackson ("The Cask of Amontillado"), Stephanie Kuehn ("The Tell-Tale Heart"), Emily Lloyd-Jones ("The Purloined Letter"), amanda lovelace ("The Raven"), Hillary Monahan ("The Masque of the Red Death"), Marieke Nijkamp ("Hop-Frog"), Caleb Roehrig ("The Pit and the Pendulum"), and Fran Wilde ("The Fall of the House of Usher").
This program is read by Dahlia Adler, Kendare Blake, JorJa Brown, Caitlin Davies, James Fouhey, Tessa Gratton, Jeanette Illidge, Emily Lloyd-Jones, Robin Miles, Natalie Naudus, amanda lovelace, Hillary Monahan, Caleb Roehrig, and Fran Wilde.
Praise for His Hideous Heart:
"Narrated by a dizzying array of exceptional storytellers, these short stories have something for every listener...Recommended for listeners who can't get enough Edgar Allan Poe or just need more thrilling audios in their listening queue." — Booklist
"Poe's ghost happily haunts this fresh, delightfully dark collection." — Kirkus, starred review
"Adler's anthology brims over with fierce delight and uncanny invention...if you haven't read Poe before, 'His Hideous Heart' works equally well as an introduction, a tribute and a loving critique." — The New York Times Book Review