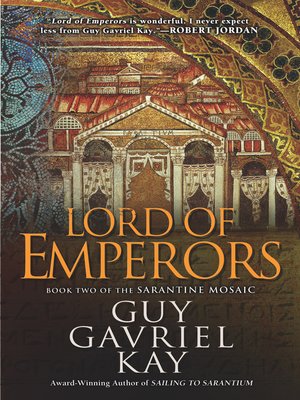 In the golden city of Sarantium, a renowned mosaicist seeks to fill his artistic ambitions and his destiny high upon a dome intended to be the emperor’s enduring sanctuary and legacy.

The beauty and solitude of Crispin's work cannot protect him from the dangerous intrigues of court and city, swirling with rumors of war and conspiracy, while otherworldly fires mysteriously flicker and disappear in the streets at night. The emperor is plotting a conquest of Crispin’s homeland to regain an empire. And with his fate entwined with that of his royal benefactor, Crispin’s loyalties come with a very high price.

And another voyager has come to the imperial city: Rustem of Kerakek, a physician from an eastern desert kingdom, determined to find his own fate amid the shifting, treacherous currents of passion and violence that define Sarantium.