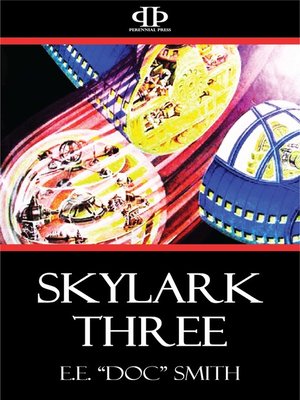 FictionScience Fiction
Skylark Three is the second book in the Skylark series and is set a year after the events of The Skylark of Space, during which year antagonist Marc "Blackie" DuQuesne has used the wealth obtained in the previous book to buy a controlling interest in the story's 'World Steel Corporation', a large company known for its ruthless attitude. When the story begins DuQuesne announces a long absence from Earth, to find another species more knowledgeable than the Osnomians allied with protagonist Richard Seaton. Shortly thereafter, DuQuesne and a henchman disappear from Earth. DuQuesne, by now aware of the 'Object Compass' trained on him, travels far enough to break the connection, then turns toward the 'Green System' of which Osnome is a part. Seaton discovers this, but is distracted by attempts to master a "zone of force": essentially a spherical, immaterial shield, with whose present form Seaton is dissatisfied for its opacity and impenetrability even by the user
FictionScience Fiction

Edward Elmer Smith was an American food engineer (specializing in doughnut and pastry mixes) and an early science-fiction author, best known for the Lensman and Skylark series. He is sometimes called the father of space opera.

More about E. E. Smith
Skylark Three
Copy and paste the code into your website.
New here? Learn how to read digital books for free