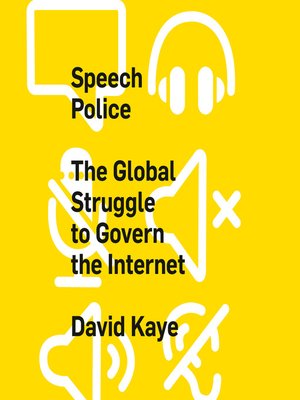 View more libraries...
Who polices speech online? Who is in charge?
"There is an epidemic sweeping the world," the Nigerian Minister of Information, Lai Mohammed, said. "It is the epidemic of fake news. Mixed with hate speech, it is a disaster waiting to happen." Some argue that the disaster has already happened. But is the solution as simple as ridding social media of disinformation and hate speech? Who should decide whether content should be removed from platforms, or which users should be kicked off? Should governments set the rules and force the American behemoths—Facebook, YouTube and Twitter—to follow? Or should the companies be permitted to moderate their space as they see fit? David Kaye, one of the world's leading voices on human rights in the digital age, deals with these issues on a daily basis as the United Nations' Special Rapporteur on freedom of opinion and expression. Speech Police brings us behind the scenes, from Facebook's "mini-legislative" meetings to the European Commission's closed-door negotiations, and introduces journalists, activists, and content moderators who take down a virtual flood of photos, videos and text every day. He tells the story of people around the world who are trying to get it right while facing an almost impossible task—with massive consequences for users and the public.
Creative Commons cover icons (left to right) all courtesy of The Noun Project: Talk Bubble © diambergerak, ID; Ear Phones © Karen Tyler, GB; Microphone © John Caserta, US; Volume by Krishna; Ear © Scott Lewis, US