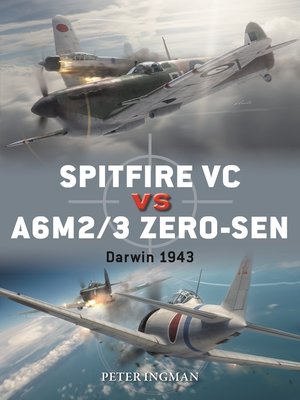 Just weeks after Pearl Harbor, Darwin was mauled by a massive Japanese attack. Without a single fighter to defend Australian soil, the Australian government made a special appeal to Britain for Spitfires.

A year later the Spitfire VC-equipped No 1 Fighter Wing, RAAF, faced the battle-hardened 202nd Kokutai of the IJNAF, equipped with A6M2 Zero-sens, over Darwin. This was a gruelling campaign between evenly matched foes, fought in isolation from the main South Pacific battlegrounds. Pilots on either side had significant combat experience, including a number of Battle of Britain veterans. The Spitfire had superior flight characteristics but was hampered by short range and material defects in the tropical conditions, while the Japanese employed better tactics and combat doctrine inflicting serious losses on the over-confident Commonwealth forces.

Fully illustrated with detailed full-colour artwork, this is the gripping story of two iconic aircraft facing off against each other above Australia.