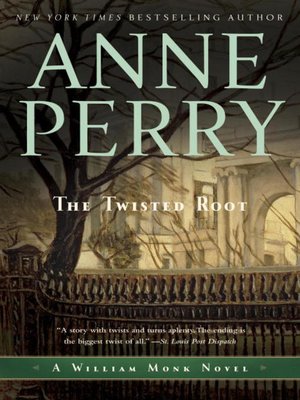 View more libraries...
"A novel whose suspense remains high until the final pages . . . Anne Perry is [a] master of crime fiction who rarely fails to deliver a strong story and a colorful cast of characters."—The Baltimore Sun
A young bridegroom enlists private investigator William Monk to track down his fiancée, Miriam Gardiner, who disappeared suddenly from a party at a luxurious Bayswater mansion. Monk soon finds the coach in which Miriam fled and, nearby, the murdered body of the coachman, but there is no trace of the young passenger. What strange compulsion could have driven the beautiful widow to abandon the prospect of a loving marriage and financial abundance? Monk and clever nurse Hester Latterly, themselves now newlyweds, desperately pursue the elusive truth—and an unknown killer whose malign brilliance they have scarcely begun to fathom.
BONUS: This edition contains excerpts from Anne Perry's Treason at Lisson Grove and Execution Dock.
Praise for The Twisted Root

"When a law flies in the face of moral justice, can a person be condemned for defying it—even to the point of murder? Anne Perry argues the issue with uncommon eloquence."—The New York Times Book Review