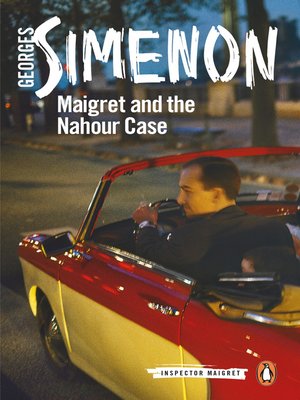 Maigret and the Nahour Case

FictionMysterySuspenseThriller
"One of the greatest writers of the twentieth century . . . Simenon was unequaled at making us look inside, though the ability was masked by his brilliance at absorbing us obsessively in his stories." —The Guardian
When a gambler is discovered dead in his home, a coincidence at the scene sends Inspector Maigret down a twisted path of secrets and lies in search of a killer
Maigret receives an urgent call in the middle of the night from a doctor friend who says he has just treated a wealthy woman for a suspicious gunshot wound. Not long after, Maigret is called to the home of professional gambler, Felix Nahour, who has just been found by his chambermaid, shot dead. The inspector is shocked to find he recognizes a photo of the man's wife, who quickly becomes his main suspect. All signs point to her guilt, but as he digs deeper, Maigret begins to infer there might be more to this complicated affair.
Suspenseful and terrifically sinister, Maigret and the Nahour Case is a masterful exploration of the twin passions of love and hate as they mingle in the shadowy mind of a criminal.
FictionMysterySuspenseThriller

Maigret and the Nahour Case
Copy and paste the code into your website.
New here? Learn how to read digital books for free