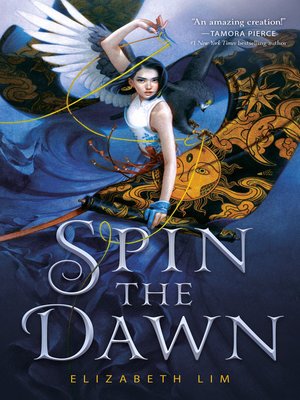 FantasyRomanceYoung Adult FictionYoung Adult Literature
"Looking for your next big YA fantasy series? We've got our eye on this stylist blockbuster." —Entertainment Weekly
Project Runway meets Mulan in this sweeping fantasy about a young girl who poses as a boy to compete for the role of imperial tailor and embarks on an impossible journey to sew three magic dresses, from the sun, the moon, and the stars.
Maia Tamarin dreams of becoming the greatest tailor in the land, but as a girl, the best she can hope for is to marry well. When a royal messenger summons her ailing father, once a tailor of renown, to court, Maia poses as a boy and takes his place. She knows her life is forfeit if her secret is discovered, but she'll take that risk to achieve her dream and save her family from ruin. There's just one catch: Maia is one of twelve tailors vying for the job.
Backstabbing and lies run rampant as the tailors compete in challenges to prove their artistry and skill. Maia's task is further complicated when she draws the attention of the court magician, Edan, whose piercing eyes seem to see straight through her disguise.
And nothing could have prepared her for the final challenge: to sew three magic gowns for the emperor's reluctant bride-to-be, from the laughter of the sun, the tears of the moon, and the blood of stars. With this impossible task before her, she embarks on a journey to the far reaches of the kingdom, seeking the sun, the moon, and the stars, and finding more than she ever could have imagined.
Steeped in Chinese culture, sizzling with forbidden romance, and shimmering with magic, this young adult fantasy is pitch-perfect for fans of Sarah J. Maas or Renée Ahdieh.
"Spin the Dawn is proof that casting a wider net not only gives us a fresh story that feels unlike everything else on the shelves beside it but also allows for richer and more nuanced storytelling." —NPR
"All the cutthroat competition of a runway fashion reality show and the thrilling exploits of an epic quest... a stunning tapestry of adventure." —The Washington Post
"What an amazing creation! Every time I thought I knew where it was going, I was wrong. This is a white-knuckle read." —Tamora Pierce, #1 New York Times Bestselling author of Tempests and Slaughter
FantasyRomanceYoung Adult FictionYoung Adult Literature

ELIZABETH LIM grew up in the San Francisco Bay Area, where she was raised on a hearty diet of fairy tales, myths, and songs. Before becoming an author, Elizabeth was a professional film and video game composer, and she still tends to come up with ...

More about Elizabeth Lim
Spin the Dawn
Copy and paste the code into your website.
New here? Learn how to read digital books for free