Dukes by the Dozen 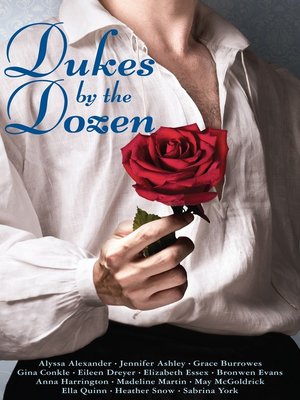 A DUKE FOR ALL SEASONS!

What's better than a dashing duke? A dozen of them! In this case, a baker's dozen—thirteen of your favorite historical romance authors have come together to bring you more than a dozen tantalizing novellas, with one per month, for a year's worth of never-before-released romances.

January – Duke in Winter by Alyssa Alexander — When the highwayman demanded that the Duke of Highrow stand and deliver, he didn't know she would steal his heart.

February – The Difference One Duke Makes by Elizabeth Essex — All it takes is one frosty night for two imperfect people, former naval commander Marcus Beecham and ruined Penelope Pease, to meet and make the perfect February Valentine.

March – Discovering the Duke by Madeline Martin — Reunited at a house party after a lackluster start to their marriage, the Duke of Stedton attempts to win his Duchess' heart. Will a sizzling wager be enough to melt the frost between them, or will it truly remain the coldest winter in London?

April – The Duke and the April Flowers by Grace Burrowes — The Duke of Clonmere must marry one of the Earl of Falmouth's three giggling younger daughters, but Lady Iris—Falmouth's oldest, who is not at all inclined to giggling—catches Clonmere's eye, and his heart!

May – Love Letters from a Duke by Gina Conkle — The Duke of Richland needs a proper duchess, but he wants his thoroughly fun, entirely inappropriate neighbor, Mrs. Charlotte Chatham. She's widowed, older, and if the whispers prove true—barren.

June – Her Perfect Duke by Ella Quinn — Still suffering over the loss of his wife and child, Giles, Duke of Kendal sees Lady Thalia Trevor at a market and is instantly smitten. There is only one problem. She is already betrothed to another man. Will she defy her powerful father to marry him?

July – How to Ditch a Duke by May McGoldrick — Lady Taylor Fleming is an heiress with a suitor on her tail. Her plan to ditch him is simple, escape to the Highlands. But there is nothing simple about the Duke of Bamberg. And even with the best laid plans, things can go awry...

August – To Tempt A Highland Duke by Bronwen Evans — Widowed Lady Flora Grafton must be dreaming. Dougray Firth, Duke of Monreith, who once pledged her his heart but then allowed her to marry another, has just proposed. Why now, after eight years? When she learns the truth, can she trust Dougray to love her enough this time?

September – Duke in Search of a Duchess by Jennifer Ashley — The meticulous Duke of Ashford is dismayed when his children ask Helena Courtland, the gossipy, busybody young widow next door, to find Ash a new wife. But she sweeps into his home and his life before he can stop her, turning Ash's precisely ordered world into a chaotic whirlwind.

October – Dear Duke by Anna Harrington — When the Duke of Monmouth, decides to build a canal, he isn't prepared for an old mill owner and his daughter to stand in his way. The only person who understands him is the anonymous pen pal to whom he's been pouring out his heart, a woman not at all who she seems.

November – Must Love Duke by Heather Snow — Lady Emmaline Paulson already has the only Duke she wants in her life—an adorable puppy she rescued from the Serpentine with the help of a handsome stranger. Can Maxwell Granville, heir to a dukedom, convince her there's room for him, too?