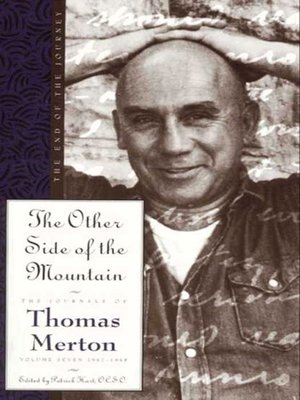 The Other Side of the Mountain

The End of the Journey

With the election of a new Abbot at the Abbey of Gethsemani, Merton enters a period of unprecedented freedom, culminating in the opportunity to travel to California, Alaska, and finally the Far East – journeys that offer him new possibilities and causes for contemplation. In his last days at the Abbey of Gethsemani, Merton continues to follow the tumultuous events of the sixties, including the assassinations of Martin Luther King, Jr., and Robert Kennedy. In Southeast Asia, he meets the Dalai Lama and other Buddhist and Catholic monks and discovers a rare and rewarding kinship with each. The final year is full of excitement and great potential for Merton, making his accidental death in Bangkok, at the age of fifth-three, all the more tragic.

Thomas Merton (1915-1968) was a Trappist monk, writer, and peace and civil rights activist. Merton's works have had a profound impact on contemporary religious and philosophical thought. He is best known for his autobiography, The Seven Storey Mou...

More about Thomas Merton
The Other Side of the Mountain
Copy and paste the code into your website.
New here? Learn how to read digital books for free