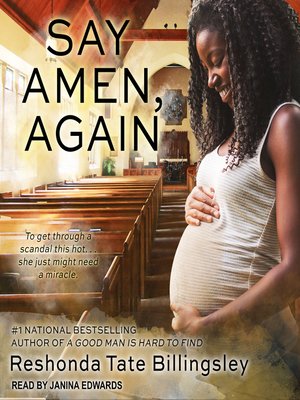 FictionAfrican American FictionLiteratureChristian Fiction
The spirited Houston congregation featured in ReShonda Tate Billingsley's Let the Church Say Amen and Everybody Say Amen has a major scandal unfolding-and, as always, the outspoken Rachel Jackson Adams is at the heart of the drama. As the First Lady of Zion Hill, Rachel is not only Pastor Lester Adams's wife-she's currently his eight-months-pregnant wife, who's going toe-to-toe with Lester's onetime mistress, congregant Mary Richardson, also pregnant. Her baby may or may not be Lester's, but Mary's doing all she can to win sympathy and turn her fellow churchgoers against Rachel-even threatening to blackmail Pastor Adams with a paternity agreement. After all, where can an unmarried mother-to-be go but to the Lord? Rachel has a few choice answers for exactly where Mary can go . . . but as these expectant moms do battle, hostilities erupt into a drama unlike anything Zion Hill has ever seen. Something has to give, and while Rachel contemplates everything from transferring her lifelong church membership to packing up and leaving Lester, she knows deep down God is calling her to forgiveness. Will the arrival of the new babies bring a new understanding? Or harden forever the anger that's dividing them?
FictionAfrican American FictionLiteratureChristian Fiction

More about ReShonda Tate Billingsley
Say Amen, Again
Copy and paste the code into your website.
New here? Learn how to read digital books for free