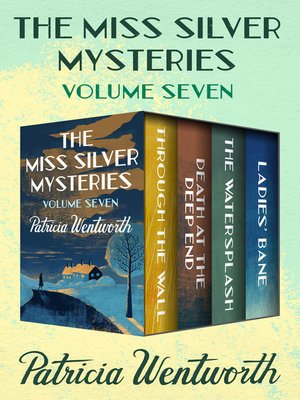 Through the Wall, Death at the Deep End, The Watersplash, and Ladies' Bane · The Miss Silver Mystery

Through the Wall: After years of toil caring for her layabout sister, Marian Brand is shocked when her unknown uncle leaves her his entire estate. Now, she can finally be happy. But her uncle made a lot of postmortem enemies when he cut them out of his will, so claiming the riches will make them her enemies, too. Before long someone is dead—and it's up to Miss Maud Silver to find the killer.

Death at the Deep End: Anna Ball was never one to put down roots. For the past year, she moved from one job as a nanny to another, unable to settle or make friends. Then one day she simply vanished. The only one who noticed she was gone is an old school friend who seeks out Miss Silver for help. A lonely girl has disappeared without a trace, and Miss Silver smells a whiff of murder in the air.

The Watersplash: Edward Random returns to the town of Greenings after years away, trying to start his life anew. But an old family feud stands in his way, and the situation at the Random manor house grows vicious in the wake of under-gardener William Jackson's death. Did he drown by accident, or was he murdered? Only Miss Silver can say for sure.

Ladies' Bane: No one has seen Allegra Trent since she got married and moved to the faraway town of Bleake. For years she put off visits from her family again and again, and then stopped writing at all. Then, suddenly, Allegra urges her sister to come visit. At first, Ione is puzzled, but upon her arrival she suspects that ominous forces are at work. When an unexpected death occurs and her worst suspicions are confirmed, Miss Silver is the only one who can uncover the truth.

These charming traditional British mysteries featuring the unstoppable Miss Silver—whose stout figure, fondness for Tennyson, and passion for knitting disguise a keen intellect and a knack for cracking even the toughest cases—are sure to delight readers of Agatha Christie, Ellis Peters, and Dorothy L. Sayers.

Patricia Wentworth (1878–1961) was one of the masters of classic English mystery writing. Born in India as Dora Amy Elles, she began writing after the death of her first husband, publishing her first novel in 1910. In the 1920s, she introduced the...

More about Patricia Wentworth
The Miss Silver Mysteries Volume Seven
Copy and paste the code into your website.
New here? Learn how to read digital books for free