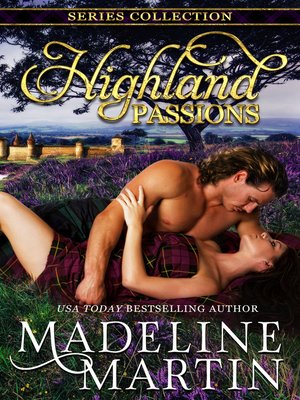 Adventure to lush, tempting Scotland with books 1-3 of the steamy, suspenseful Highland Passions series, where empowered women find happily ever after with the men strong enough to love them.

A GHOSTLY TALE OF FORBIDDEN LOVE - Book 1
Senara agrees to work as a lady's maid at Castle of Park to help ease the financial burden of her beloved family. She does not expect to have such a wicked mistress any more than she expects to find a handsome laird...or a ghost with a burning need for retribution.

Gavin vowed on his father's death bed to watch over his aunt, and regrets it every day. Especially when her new maid arrives. The woman is extraordinarily fascinating which stirs his cruel aunt's ire. Can he protect the woman from his aunt? Even more important, can he keep himself from giving into his longing for the country lass?

Theirs is a journey of treacherous pasts, painful loss, hidden longing and vengeance.

THE MADAM'S HIGHLANDER - Book 2
AN UNCONVENTIONAL WOMAN...
Freya Campbell is the madam of Molly's, an infamous Edinburgh bawdy house. Running the establishment not only enables her to help war widows and aid soldiers, but the income generated affords her family a good life and safety in times that are uncertain and dangerous.

AN HONORABLE MAN...
Ewan Fraser is a man shamed by his father's transgressions. To salvage his legacy and name, he has earned his way as a Captain in the Black Watch, England's Scottish regiment. When war turns the days dark and dismal, he fears for his mother's safety and will stop at nothing to protect her.

A LOVE THAT KNOWS NO BOUNDS.
With England's hold on Scotland tightening, Ewan and Freya must work together to save their threatened families. But can two unlikely lovers find happiness in a world with seemingly no future?

THE HIGHLANDER'S UNTAMED LADY - Book 3
A STRONG HIGHLAND LAIRD
The fate of his Highland clan rests on Laird Evander Mackenzie's shoulders. The long winter killed his crops, and now the threat of famine looms over the land. To keep his people from starving, Evander needs funds—and he needs them fast. When an English earl offers him an exorbitant dowry to marry the man's daughter, Evander thinks he's found the perfect solution. There's only one problem: his new bride won't go back to his castle without a fight.

NEEDS A WOMAN WHO CAN'T BE TAMED.
Feisty Lady Diana Stuart is determined to win her independence. Because of her refusal to marry, her father has imprisoned and abandoned her. Still Diana refuses to admit defeat, and she plots an escape to a cave steeped in local lore. But there, Diana meets another man determined to control her fate: Evander. Though Evander manages to capture her, Diana refuses to go meekly.

Evander is drawn to Diana's unconquerable spirit, but her secrets may lead to their undoing. In a world filled with death and heartbreak, is it fate or legend that will hold them together?