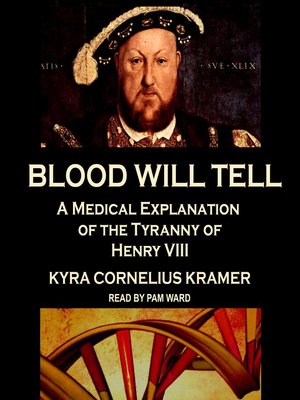 A Medical Explanation of the Tyranny of Henry VIII

Biography & AutobiographyHistoryNonfiction
With his tumultuous love life, relentless pursuit of a male heir, and drastic religious transformation, England's King Henry VIII's life sounds more like reality television than history. He was a man of fascinating contradictions-he pursued a woman he loved for almost a decade only to behead her less than four years after their marriage. He defended Catholicism so vigorously that he was honored as Defender of the Faith, but he went on to break with Rome and have himself declared Supreme Head of the Church of England. Worst of all, the King who began his reign praised as "hero" and "lover of justice and goodness" ended it having metamorphosed into such a monster that he was called the "English Nero." What could have caused these incredible paradoxes? Could there be a simple medical explanation for the King's descent into tyranny? Where do the answers lie? Blood will tell.
Biography & AutobiographyHistoryNonfiction

Kyra Cornelius Kramer is a medical anthropologist and historian who lives outside of Cardiff, Wales. She is the author of several books, including Edward VI in a Nutshell, Henry VIII's Health in a Nutshell, The Jezebel Effect, and Mansfield Parson...

More about Kyra Cornelius Kramer
Blood Will Tell
Copy and paste the code into your website.
New here? Learn how to read digital books for free