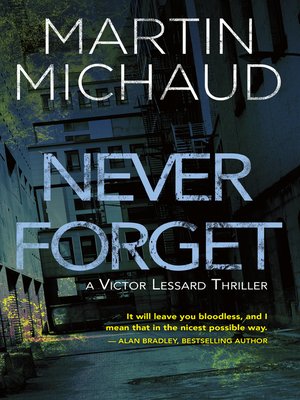 FictionMystery
Tormented, rebellious police detective Victor Lessard races to track down a ruthless killer in Montreal.
"Martin Michaud is a master at twisty storytelling and compelling atmosphere." — Catherine McKenzie
"Never Forget is a crackerjack read." — Quill & Quire "A raucous crime thriller." — Publishers Weekly
When a homeless man jumps to his death in Old Montreal, the police discover two wallets in his possession: one belonging to a retired psychiatrist who was murdered in a bizarre ritual, the other to a powerful corporate lawyer who has vanished. As Montreal police detective Victor Lessard and his partner, Jacinthe Taillon, work to solve the separate mysteries, a dark conspiracy begins to emerge.
While the pressure builds and the bodies accumulate, disturbing secrets come to light about a pivotal moment in political history. But will Lessard and Taillon crack the case in time to stop the killer from striking again?
FictionMystery

Martin Michaud is a bestselling author, screenwriter, musician, and former lawyer. His critically acclaimed Victor Lessard series has won numerous awards, including the Arthur Ellis Award and the Prix Saint-Pacôme Crime Fiction, and is the basis f...

More about Martin Michaud
Never Forget
Copy and paste the code into your website.
New here? Learn how to read digital books for free