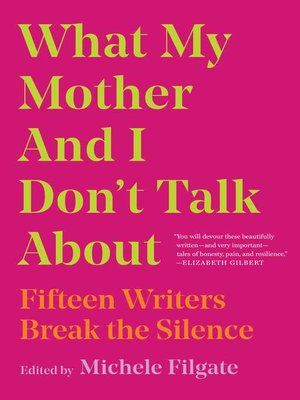 What My Mother and I Don't Talk About

FictionLiterary Anthologies
ONE OF NPR'S BEST BOOKS OF 2019

*Most Anticipated Reads of 2019 by Publishers Weekly, BuzzFeed, The Rumpus, Lit Hub, The Week, and Elle.com*

Fifteen brilliant writers explore what we don't talk to our mothers about, and how it affects us, for better or for worse.
As an undergraduate, Michele Filgate started writing an essay about being abused by her stepfather. It took her more than a decade to realize what she was actually trying to write: how this affected her relationship with her mother. When it was finally published, the essay went viral, shared on social media by Anne Lamott, Rebecca Solnit, and many others. The outpouring of responses gave Filgate an idea, and the resulting anthology offers a candid look at our relationships with our mothers.

While some of the writers in this book are estranged from their mothers, others are extremely close. Leslie Jamison writes about trying to discover who her seemingly perfect mother was before ever becoming a mom. In Cathi Hanauer's hilarious piece, she finally gets a chance to have a conversation with her mother that isn't interrupted by her domineering (but lovable) father. André Aciman writes about what it was like to have a deaf mother. Melissa Febos uses mythology as a lens to look at her close-knit relationship with her psychotherapist mother. And Julianna Baggott talks about having a mom who tells her everything.

As Filgate writes, "Our mothers are our first homes, and that's why we're always trying to return to them." There's relief in breaking the silence. Acknowledging what we couldn't say for so long is one way to heal our relationships with others and, perhaps most important, with ourselves.

More about Michele Filgate
What My Mother and I Don't Talk About
Copy and paste the code into your website.
New here? Learn how to read digital books for free