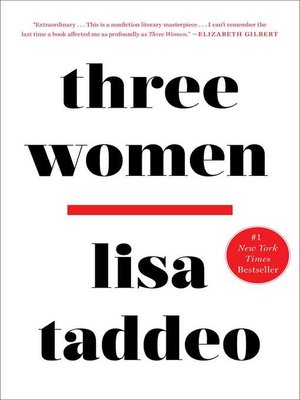 HistorySociologyWomen's StudiesNonfiction
The instant #1 New York Times bestseller and one of the most talked-about books of the year, Lisa Taddeo's Three Women is "the most in-depth look at the female sex drive that's been published in decades" (New York) and a "groundbreaking...breathtaking...staggeringly intimate" (Entertainment Weekly) look at the sex lives of three real American women—based on nearly a decade of reporting.
Hailed as "a dazzling achievement" (Los Angeles Times) and "riveting page-turner that explores desire, heartbreak, and infatuation in all its messy, complicated nuance" (The Washington Post), Lisa Taddeo's Three Women has captivated readers, booksellers, and critics—and topped bestseller lists—worldwide.

Declared "the best book of the year" by Elizabeth Gilbert and "a breathtaking and important book" by Cheryl Strayed, Three Women has won praise everywhere from Columbia Journalism Review ("deeply reported, elegantly written, almost uncomfortably intimate") to Refinery29 ("the hype for Three Women is real; in fact, it's insufficient"), from Esquire ("a heartbreaking, gripping, astonishing masterpiece") to Time ("Three Women is a battle cry...For anyone who thinks they know what women want, this book is an alarm, and its volume is turned all the way up.") In the words of The New Statesman, "This is an unusual, startling, and gripping debut. It feels to me like the kind of bold, timely, once-in-a-generation book that every house should have a copy of, and probably will before too long."

In suburban Indiana we meet Lina, the homemaker and mother of two whose marriage, after a decade, has lost its passion. Starved for affection, Lina battles daily panic attacks and, after reconnecting with an old flame through social media, embarks on an affair that quickly becomes all-consuming. In North Dakota we meet Maggie, the seventeen-year-old high school student who allegedly has a clandestine physical relationship with her handsome, married English teacher; the ensuing criminal trial will turn their quiet community upside down. Finally, in the northeast we meet Sloane, the successful, refined restaurant owner whose husband enjoys watching her have sex with other men and women.

Based on years of immersive reporting and told with astonishing frankness and immediacy, Three Women is both a feat of journalism and a triumph of storytelling, brimming with nuance and empathy. "A work of deep observation, long conversations, and a kind of journalistic alchemy" (Kate Tuttle, NPR), Three Women introduces us to three unforgettable women—and one remarkable writer—whose experiences remind us that we are not alone.
HistorySociologyWomen's StudiesNonfiction

Lisa Taddeo has contributed to New York magazine, Esquire, Elle, Glamour, and many other publications. Her nonfiction has been included in the Best American Sports Writing and Best American Political Writing anthologies, and her short stories have...

More about Lisa Taddeo
Three Women
Copy and paste the code into your website.
New here? Learn how to read digital books for free