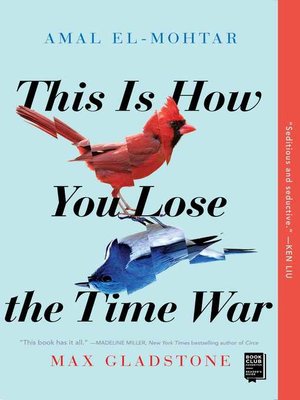 This Is How You Lose the Time War

FantasyFictionRomanceScience Fiction
ONE OF NPR'S BEST BOOKS OF 2019

Two time-traveling agents from warring futures, working their way through the past, begin to exchange letters—and fall in love in this thrilling and romantic book from award-winning authors Amal El-Mohtar and Max Gladstone.
In the ashes of a dying world, Red finds a letter marked "Burn before reading. Signed, Blue."

So begins an unlikely correspondence between two rival agents in a war that stretches through the vast reaches of time and space.

Red belongs to the Agency, a post-singularity technotopia. Blue belongs to Garden, a single vast consciousness embedded in all organic matter. Their pasts are bloody and their futures mutually exclusive. They have nothing in common—save that they're the best, and they're alone.

Now what began as a battlefield boast grows into a dangerous game, one both Red and Blue are determined to win. Because winning's what you do in war. Isn't it?

A tour de force collaboration from two powerhouse writers that spans the whole of time and space.
FantasyFictionRomanceScience Fiction

Max Gladstone is the author of the Hugo-nominated Craft Sequence, which Patrick Rothfuss called "stupefyingly good." The sixth book, Ruin of Angels, was released September 2017. Max's interactive mobile game Choice of the Deathless was nominated f...

Amal El-Mohtar is an award-winning author, editor, and critic. Her short story "Seasons of Glass and Iron" won the Hugo, Nebula, and Locus awards and was a finalist for the World Fantasy, Sturgeon, Aurora, and Eugie Foster awards. She is the autho...

More about Amal El-Mohtar
This Is How You Lose the Time War
Copy and paste the code into your website.
New here? Learn how to read digital books for free