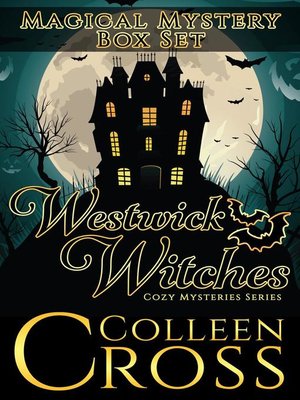 You'll love these laugh out loud, humorous cozy mysteries!
Three full-length novels in one special Westwick Witches Cozy Paranormal Mystery box set!
1. Witch You Well
Be careful what you wish for...
Dead billionaires are not good for business! That's what Aunt Pearl complains to Cen when the dead body is found in the cozy family inn at Westwick Corners.
Still, it's not Cen's problem. She lives an ordinary life away from her witch-ful family for a reason. She got her ordinary fiancé and her ordinary job as a journalist using no magic whatsoever, and no inconvenient local murder is going to change her comfortable existence.
Even if the entire town is now accusing Aunt Pearl of murdering her guest. Even if her fiancé is acting weird and talking about seeing ghosts. Even if the town's sexy new sheriff, Tyler Gates, treats her like the most hexing of all the witches...
If you love funny cozy mysteries infused with a dose of humor and the supernatural, you'll love this paranormal witch cozy! Witch You Well appeals to readers of the Stephanie Plum series by Janet Evanovich.
"...A bewitching, supernatural treat. If you love witch cozy mysteries you'll love Cendrine West and her wacky witch family!"

2. Rags to Witches
Win, lose, or draw...
Cendrine West can't catch a break. She's close to landing a new job, and things are getting cozy with sexy sheriff Tyler Gates. All that changes when she is kidnapped by renegade witch Aunt Pearl, who is hell bent on avenging a friend's untimely death. Its Las Vegas or bust...for all the wrong reasons.
Rocco Racatelli is a hunky Vegas kingpin—and the next mob target. Lady Luck has dealt him a losing hand and he wants revenge. When Aunt Pearl is a little too eager to help, project Vegas Vendetta quickly escalates into an all-out mob turf war. As the witches are thrust into Sin City's seamy underworld, bodies pile up and secrets are exposed.
It's not just the Las Vegas heat that's scorching...Rocco is intent on winning Cen's heart. But she only wants the man she left behind in Westwick Corners. All she has to do is solve a murder, out-magic her ornery aunt, and take down the Las Vegas mafia. What could possibly go wrong?
When organized crime meets unorganized magic, anything can happen! As the body count climbs, it's clear that Cen needs more than a miracle in the desert to set things right.

3. Witch and Famous
Lights, camera, assassin...
A Hollywood movie shoot comes to town and journalist Cendrine West is eager for a scoop. Her witchy family also wants in on the action, but shenanigans with the stars soon turn to Tinseltown tragedy.
Bodies are piling up faster than a coven's worth of curses, and everything points back to Cen's star-struck family. They will stop at nothing in their quest for supernatural stardom, even if that means meddling in a murder investigation.
The witches have created one spell of a mess and given the killer a chance to get away with murder. Cen resorts to her own blend of supernatural justice to keep her family in check, but can she unmask the killer before he strikes again?
Welcome to the wild, wild Wests!
Fans of Janet Evanovich and paranormal mystery, cozy mystery, and wickedly funny witches will love the Westwick Witches!