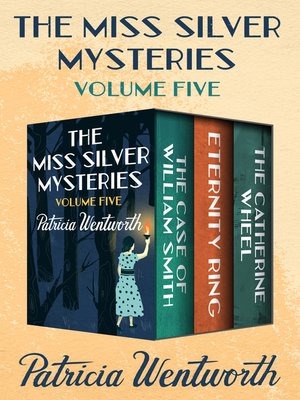 The Case of William Smith, Eternity Ring, and The Catherine Wheel · The Miss Silver Mystery

FictionMystery
The British governess-turned-sleuth continues her witty, inquisitive ways with three mysteries from the "timelessly charming" series (Charlotte MacLeod).
Retired governess Maud Silver has discovered an entirely new calling: private detection. And though she may seem an unlikely sleuth, Scotland Yard needs her more than ever in this charming series from "a first-rate storyteller" (The Daily Telegraph).

The Case of William Smith: William Smith isn't sure what his name is, but he knows it isn't William Smith. That was the name the Nazis gave him in 1942, when he was sent to die in one of their nightmarish camps. Now the war is over and he's back in England, ready to start over. But even a man with no past can't escape history. And if Miss Silver can figure out his true identity, his enemies are going to finish what they started.

Eternity Ring: Det. Sgt. Frank Abbot thought he'd spend a quiet holiday at his family's estate. Instead, he hears wild tales of a man dragging a murdered girl into the woods. Naturally, he calls his friend, Miss Maud Silver, to take a look. But when no one can locate the body of the rumored victim and the sole witness suffers a broken neck, the only thing Miss Silver knows for sure is that the pastoral peace of this town masks something far more sinister.

The Catherine Wheel: When a wealthy man named Taverner places a newspaper ad looking for distant relatives to add to his will, several possible relations appear from all over England. But with the scent of money in the air, old feuds reemerge and the extended family squabbles over the cash. It's not long before there is one less Taverner, and Miss Silver is called in to find out who put the knife in his back.

These charming British mysteries featuring the unstoppable Miss Silver—whose stout figure, fondness for Tennyson, and passion for knitting belie a keen intellect and a knack for cracking even the toughest cases—are sure to delight readers of Agatha Christie, Ellis Peters, and Dorothy L. Sayers.
FictionMystery

Patricia Wentworth (1878–1961) was one of the masters of classic English mystery writing. Born in India as Dora Amy Elles, she began writing after the death of her first husband, publishing her first novel in 1910. In the 1920s, she introduced the...

More about Patricia Wentworth
The Miss Silver Mysteries Volume Five
Copy and paste the code into your website.
New here? Learn how to read digital books for free