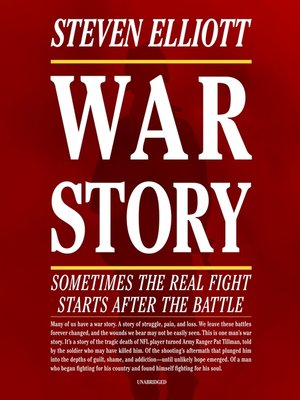 Sometimes the Real Fight Starts after the Battle

Every soldier has a war story.

Steven Elliott's opens with the death of American hero Pat Tillman by "friendly fire" in Afghanistan-when Army Ranger Elliott pulled the trigger, believing he and his fellow soldiers were firing on the enemy.

Tormented by remorse and PTSD in the aftermath of Tillman's death, Elliott descended into the depths of guilt, alcoholism, and depression; lost his marriage and his faith; and struggled to stay alive. The war that began on foreign soil had followed him home.

A must-listen for veterans and their loved ones, War Story is an explosive look at the chaos of war-and the battle for life in its aftermath. It confronts some of life's biggest questions: Why do we choose to fight for a country or a cause? What happens when the cost of that fight overwhelms and destroys? Can we forgive and be forgiven? How do we find hope? At its core, War Story is a dramatic personal encounter with war and faith, love and tragedy, and ultimate renewal.

All of the author's proceeds from the writing of this book will be donated to organizations serving the mental health needs of the active duty and veteran community.

Steven Elliott joined the military in 2003 and served as a member of the elite 75th Ranger Regiment. In 2004, he deployed to the Afghanistan-Pakistan border. In the midst of an enemy ambush, he was one of four Rangers who mistook Pat Tillman's pos...

More about Steven Elliott
War Story
Copy and paste the code into your website.
New here? Learn how to read digital books for free