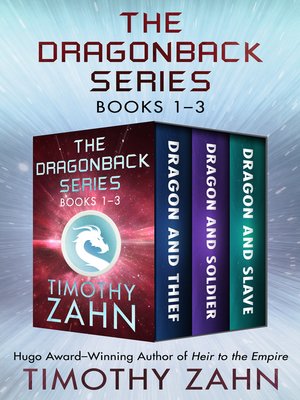 FictionScience Fiction
The first three adventures in the Dragonback science fiction fantasy series from the #1 New York Times–bestselling author of the Thrawn series.

Dragon and Thief: Young thief and con artist Jack Morgan is hiding out on an uninhabited planet after he's falsely accused of a crime. But his solitude is interrupted when Draycos, a warrior whose reptilian race is being targeted for extinction, makes an emergency landing. The two will be able to survive, but only if they literally bond together . . .

Dragon and Soldier: When all is well, Draycos looks like nothing more than a tattoo on Jack Morgan's back. But when Jack's threatened, the K'da warrior appears in his true, dragonlike form. Together they go undercover to investigate a mercenary outfit connected to the extermination of Draycos's people, and it turns out Jack isn't the only new recruit with a secret . . .

Dragon and Slave: Following a lead, Jack becomes a slave on a Brummga alien estate where he must find out all he can while under the cruel watch of a vicious slave master who has no problem killing the help. Fortunately, Draycos always has his back.
FictionScience Fiction

Timothy Zahn is a New York Times bestselling science fiction author of more than forty novels, as well as many novellas and short stories. Best known for his contributions to the expanded Star Wars universe of books, including the Thrawn trilogy, ...

More about Timothy Zahn
The Dragonback Series Books 1–3
Copy and paste the code into your website.
New here? Learn how to read digital books for free