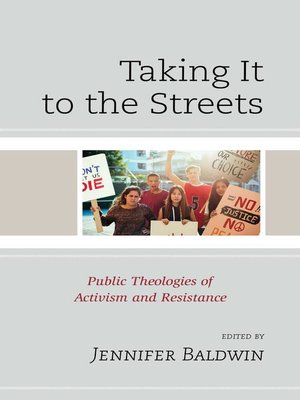 Taking It to the Streets

Public Theologies of Activism and Resistance

Religion & SpiritualityNonfiction
Taking It to the Streets: Public Theologies of Activism and Resistance is an edited volume that explores the critical intersection of public theology, political theology, and communal practices of activism and political resistance. This volume functions as a sister/companion to the text Religion and Science as Political Theology: Navigating Post-Truth and Alternative Facts and focuses on public, civic, performative action as a response to experiences of injustice and diminishments of humanity. There are periods in a nation's civil history when the tides of social unrest rise into waves upon waves of public activism and resistance of the dominant uses of power. In American history, activism and public action including and extending beyond the Women's Suffrage, the Million Man March, protests against the Vietnam War, the Civil Rights Movement, Boston Tea Party, Black Lives Matter, the Stonewall Rebellion are hallmarks of transitional or liminal moments in our development as a society. Critical periods marked by increases in public activism and political resistance are opportunities for a society to once again decide who we will be as a people. Will we move towards a more perfect union in which all persons gain freedom in fulfilling their potential or will we choose the perceived safety of the status quo and established norms of power? Whose voices will be heard? Whose will be silenced through intimidation or harm? Ultimately, these are theological questions.
Like other forms of non-textual research subjects (movement, dance, performance art), public activism requires a set of research lenses that are often neglected in theological and religious studies. Attention to bodies, as a category, performance, or epistemological vehicle, is sorely lacking so it is no wonder that attention to the mass of moving bodies in activism is largely absent. Activism and public political resistance are a hallmark of our current social webbing and deserve scholarly attention.
Religion & SpiritualityNonfiction

Jennifer Baldwin is director of Grounding Flight Wellness Center and editor of Navigating Post-Truth and Alternative Facts: Religion and Science as Political Theology and Sensing Sacred: Exploring the Human Senses in Practical Theology and Pastora...

Jennifer Baldwin is director of Grounding Flight Wellness Center and editor of Navigating Post-Truth and Alternative Facts: Religion and Science as Political Theology and Sensing Sacred: Exploring the Human Senses in Practical Theology and Pastora...

Taking It to the Streets
Copy and paste the code into your website.
New here? Learn how to read digital books for free