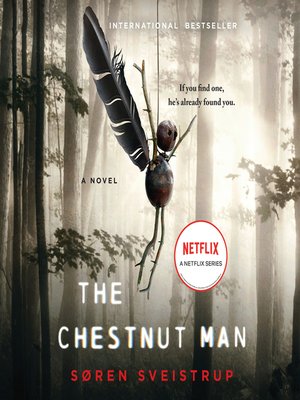 IF YOU FIND ONE, HE'S ALREADY FOUND YOU

The heart-pounding debut from the creator of the hit Scandinavian television show The Killing.

A psychopath is terrorizing Copenhagen.

His calling card is a "chestnut man"—a handmade doll made of matchsticks and two chestnuts—which he leaves at each bloody crime scene.

Examining the dolls, forensics makes a shocking discovery—a fingerprint belonging to a young girl, a government minister's daughter who had been kidnapped and murdered a year ago.

A tragic coincidence—or something more twisted?

To save innocent lives, a pair of detectives must put aside their differences to piece together the Chestnut Man's gruesome clues.

Because it's clear that the madman is on a mission that is far from over.

And no one is safe.

Søren Sveistrup is an internationally acclaimed script writer, creator and film producer of several TV series. From 2007 to 2012 he was the creator and writer of THE KILLING, which has won several international awards, been sold to more than a hun...

More about Soren Sveistrup
The Chestnut Man
Copy and paste the code into your website.
New here? Learn how to read digital books for free