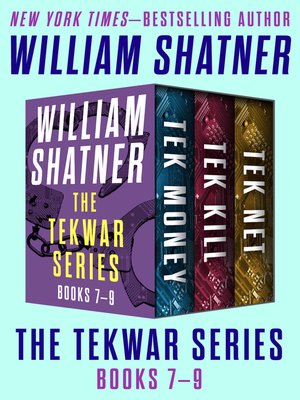 It's the twenty-second century, and mankind has expanded the horizons of science and technology. For those who want to go even further, Tek takes them there. The bio-digital microchip is more powerfully mind-altering than any other drug ever known. For those who become addicted, it's out of this world—and straight into hell. And only private eye Jake Cardigan can stop it . . .

Tek Money: Jake must race against time to save his son's life—and get the deadliest weapons in the world out of the hands of the most dangerous criminals in the universe . . .

Tek Kill: Jake and his partner, Sid Gomez, are working to clear their boss of murder charges when they uncover a far-reaching criminal conspiracy . . .

Tek Net: Sid's ex-wife is caught in the crossfire of a bloody cartel war between Teklords, and it's up to Jake and Sid to save her.
FictionMysteryScience FictionThriller

William Shatner (b. 1931) is a Canadian actor, author, and film director, known for his irreverent charm and his star turn as Captain Kirk in the original Star Trek television series, as well as many other roles. Born and raised in Montreal, Quebe...

More about William Shatner
The TekWar Series Books 7–9
Copy and paste the code into your website.
New here? Learn how to read digital books for free