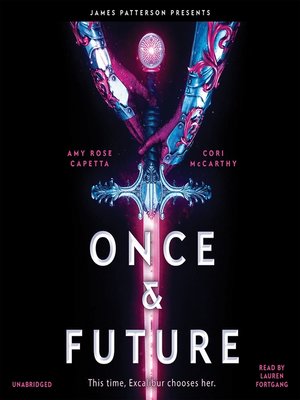 MythologyScience FictionYoung Adult FictionYoung Adult Literature
Some legends never die—they are reborn. King Arthur as you've never imagined!I've been chased my whole life. As an illegal immigrant in the territory controlled by the tyrannical Mercer corporation, I've always had to hide who I am. Until I found Excalibur.Now I'm done hiding.My name is Ari Helix. I have a magic sword, a cranky wizard, and a revolution to start.When Ari crash-lands on Old Earth and pulls a magic sword from its ancient resting place, she is revealed to be the newest reincarnation of King Arthur. Then she meets Merlin, who has aged backward over the centuries into a teenager, and together they must break the curse that keeps Arthur coming back. Their quest? Defeat the cruel, oppressive government and bring peace and equality to all humankind. No pressure. "Once & Future is a sizzling, bold exploration of gender, power, and revolution. Its dynamic and diverse cast will inspire and delight readers. I loved every second!" - Jessica Khoury, author of The Forbidden Wish
MythologyScience FictionYoung Adult FictionYoung Adult Literature

Cori McCarthy is the author of four young adult books, including BREAKING SKY, which received multiple starred reviews and is in development to become a film by Sony Pictures, and a forthcoming nonfiction picture book. Cori is an Irish-Lebanese Am...

Lauren Fortgang, a graduate of Fordham University's Theater Program, is an actress, costume designer, and narrator. She has recorded everything from video games to textbooks. Her audiobook narrations have earned AudioFile Earphones Awards and plac...

More about Amy Rose Capetta
Once & Future
Copy and paste the code into your website.
New here? Learn how to read digital books for free