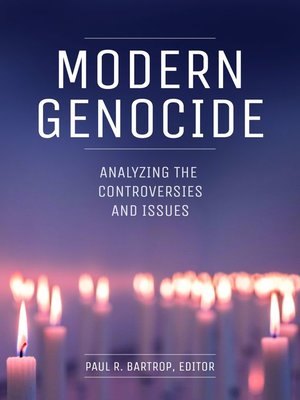 An indispensable resource for those interested in the scourge of mass murder and genocide in the 20th and 21st centuries, this book analyzes modern and contemporary controversies and issues to help readers to understand genocide in all its complexity.

This vital reference work looks at current areas of debate in genocide studies to provide insights into what a genocide is, why genocides occur, and what the consequences are once a genocide is recognized as such. It also illuminates how and why rational people can view the same set of circumstances as genocide or not, and how it might be possible in the future to alleviate or even prevent genocide. Dozens of accomplished scholars provide perceptive insights into the controversies and issues that dominate genocide discussions.

The book is organized into five parts. The first considers how genocide is defined, while the second covers the pre-1945 period as it includes such controversial topics as the American Indian Wars, Australian Aborigines, Irish Potato Famine, Armenian Genocide, Ukrainian Starvation, and Holocaust. A Cold War section examines genocidal violence in Cambodia, East Timor, and Guatemala and against the Kurds; a post-Cold War period section covers Bosnia, Rwanda, Darfur, and the Rohingya in Myanmar. The final part concerns such issues as genocide prevention, humanitarian intervention, and the role of military personnel as perpetrators of genocide.