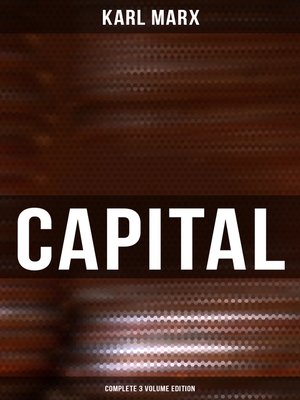 Including The Communist Manifesto, Wage-Labour and Capital, & Wages, Price and Profit

PoliticsSociologyNonfiction
This eBook has been formatted to the highest digital standards and adjusted for readability on all devices. Capital by Karl Marx is a foundational theoretical text in materialist philosophy, economics and politics. Marx aimed to reveal the economic patterns underpinning the capitalist mode of production, in contrast to classical political economists such as Adam Smith, Jean-Baptiste Say, David Ricardo and John Stuart Mill. Marx did not live to publish the planned second and third parts, but they were both completed from his notes and published after his death by his colleague Friedrich Engels. Capital is the most cited book in the social sciences published before 1950.The Communist Manifesto (originally Manifesto of the Communist Party) is an 1848 political pamphlet by German philosophers Karl Marx and Friedrich Engels. Commissioned by the Communist League and originally published in London just as the revolutions of 1848 began to erupt, the Manifesto was later recognised as one of the world's most influential political documents. Wage Labour and Capital is an essay on economics by Karl Marx, written in 1847 and first published in articles in the Neue Rheinische Zeitung in April 1849. This essay has been widely acclaimed as the precursor to Marx's important treatise Das Kapital. Value, Price and Profit was a speech given to the First International Working Men's Association in June in 1865 by Karl Marx. It was written between the end of May and June 27 in 1865, and was published in 1898.Karl Marx (1818–1883) was a famous German philosopher, economist, historian, political theorist, sociologist, journalist and revolutionary socialist.
PoliticsSociologyNonfiction

CAPITAL (Complete 3 Volume Edition)
Copy and paste the code into your website.
New here? Learn how to read digital books for free