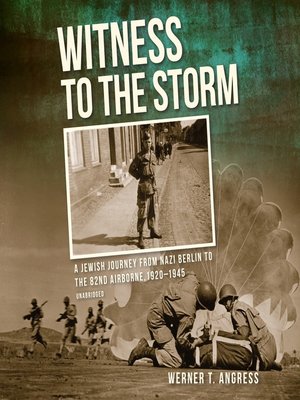 Witness to the Storm

On June 6, 1944, Werner T. Angress parachuted down from a C-47 into German-occupied France with the 82nd Airborne Division. Nine days later, he was captured behind enemy lines and, concealing his identity as a German-born Jew, became a prisoner of war. Eventually, he was freed by US forces, rejoined the fight, and participated in the liberation of a concentration camp.

Although he was an American soldier, less than ten years before he had been an enthusiastically patriotic German-Jewish boy. Rejected and threatened by the Nazi regime, the Angress family fled to Amsterdam to escape persecution and death, and young Angress then found his way to the United States.

In Witness to the Storm, Angress weaves the spellbinding story of his life, including his escape from Germany, his new life in the United States, and his experiences in World War II. A testament to the power of perseverance and forgiveness, Witness to the Storm is the powerful tale of one man's struggle to fight for and rescue the country that had betrayed him.

Claire Bloom gained international fame in 1951 with her screen debut in Charles Chaplin's motion picture Limelight. Among her many memorable films are Richard III, The Haunting, Look Back in Anger, and A Doll's House.

Werner T. Angress (1920–2010) was a German-Jewish refugee, WWII veteran, and professor of history. Werner Angress (then Tom) escaped Nazi Germany and joined the US Army in 1941, serving as a paratrooper in the 82nd Airborne Division.

More about Werner T. Angress
Witness to the Storm
Copy and paste the code into your website.
New here? Learn how to read digital books for free