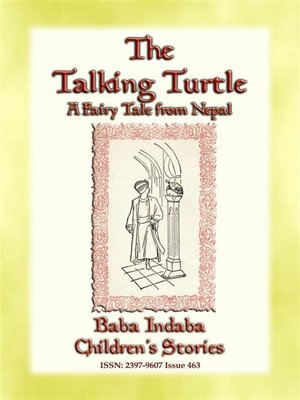 THE TALKING TURTLE--or the turtle who talked too much

Juvenile FictionMythologyFolklore
ISSN: 2397-9607 Issue 463
In this 463rd issue of the Baba Indaba's Children's Stories series, Baba Indaba narrates a Nepalese fairy tale - "The Talking Turtle".
ONCE, UPON A TIME, a long, long time ago at the foot of the Himalayan mountains, there was a king who talked too much. His name was Badahur, and from his beautiful palace, high in the mountains, he ruled many millions of people.

There was also a turtle who was even fonder of talking than the King, and he lived in a pond in the King's garden.
But for all the King was so great and so rich, his people did not respect him because he talked and talked about everything under the sun.

The King had a of prime-minister whose name was Hazar, and he was expected to say foolish things, of course, but the King seemed to want to say them all. When the King drove through the streets in his golden chariot with footmen running before and behind, even the beggars by the roadside would say, "There goes one who cannot hold his tongue."

But the turtle was even worse than the King in the matter of talking. He talked to the fishes, the parrots, the monkeys, and the birds all day long, until they were tired of the very sound of his voice.

The turtle was envious of the ducks and birds who flew to and from the pond. He pestered the ducks so much that the ducks eventually agreed to hold a stick between them which the turtle would hold onto with his mouth. After a few practice runs they took off.

Well, what happened next you ask...? How far did he go? Did he ever get to see the faraway places which the ducks flew to? To find the answers to these questions, and others you may have, you will have to download and read this story to find out!

Each issue also has a "WHERE IN THE WORLD - LOOK IT UP" section, where young readers are challenged to look up a place on a map somewhere in the world. The place, town or city is relevant to the story. HINT - use Google maps.
In looking up these place names, using Google Maps, that young people will be able to see images and read about other peoples and cultures from around the world. Through this, it is our hope that young people will not only increase their world geography but also increase their understanding and tolerance of other people and cultures.

BUY ANY of the 450+ BABA INDABA CHILDREN'S STORIES at https://goo.gl/hRYz7L

THE TALKING TURTLE--or the turtle who talked too much
Copy and paste the code into your website.
New here? Learn how to read digital books for free