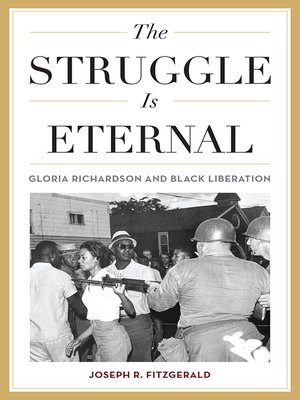 The Struggle Is Eternal

Many prominent and well-known figures greatly impacted the civil rights movement, but one of the most influential and unsung leaders of that period was Gloria Richardson. As the leader of the Cambridge Nonviolent Action Committee (CNAC), a multifaceted liberation campaign formed to target segregation and racial inequality in Cambridge, Maryland, Richardson advocated for economic justice and tactics beyond nonviolent demonstrations. Her philosophies and strategies — including her belief that black people had a right to self—defense — were adopted, often without credit, by a number of civil rights and black power leaders and activists.

The Struggle Is Eternal: Gloria Richardson and Black Liberation explores the largely forgotten but deeply significant life of this central figure and her determination to improve the lives of black people. Using a wide range of source materials, including interviews with Richardson and her personal papers, as well as interviews with dozens of her friends, relatives, and civil rights colleagues, Joseph R. Fitzgerald presents an all-encompassing narrative. From Richardson's childhood, when her parents taught her the importance of racial pride, through the next eight decades, Fitzgerald relates a detailed and compelling story of her life. He reveals how Richardson's human rights activism extended far beyond Cambridge and how her leadership style and vision for liberation were embraced by the younger activists of the black power movement, who would carry the struggle on throughout the late 1960s and into the 1970s.

Publisher:
The University Press of Kentucky
Publication Date:
2018
Series:
Civil Rights and the Struggle for Black Equality in the Twentieth Century

Joseph R. Fitzgerald is assistant professor of history and political science at Cabrini University. His areas of focus include critical race feminism and the civil rights and black power waves of the modern black liberation movement.

More about Joseph R. Fitzgerald
The Struggle Is Eternal
Copy and paste the code into your website.
New here? Learn how to read digital books for free