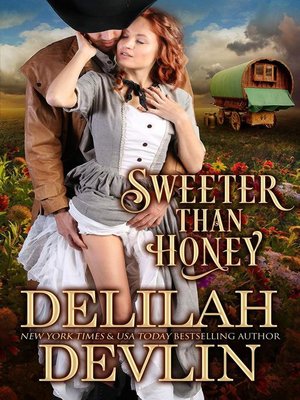 Honey Cafferty lives a happy but precarious existence as a traveling saleswoman, searching for a sense of belonging. From her colorful wagon she brews decoctions to cure ennui, sleeplessness, hysteria — and after a visit from a mysterious Mexican curandera — she believes she's found the way to improve a man's libido. But how can she package her "Elixir of Love" without being run out on a rail from the nearest town for selling something that produces such carnal effects?

Sheriff Joe Tanner is protective of his little town and downright hostile toward anyone who takes advantage of the fine folk in Two-Mule, Texas. When sees the gypsy wagon roll into town, he's ready to hurry the snake oil salesman on his way, but Honey isn't what he expected. When the men of the town begin to plead exhaustion and place the blame for their state squarely on the pretty little redhead's shoulders, he has to investigate.

Warning! Be prepared to sweat and laugh! Sweeter Than Honey is a prequel story to the Lone Star Lovers series!

Sweeter Than Honey
Copy and paste the code into your website.
New here? Learn how to read digital books for free