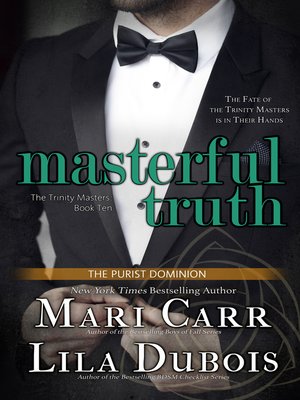 FictionMysteryRomanceSuspense
An heir to a powerful secret. A writer whose story began with an illicit affair. A man incapable of love.
Tess Hamilton is proud of her family's history, but being a descendant of one of the founding fathers and a member of the Trinity Masters—America's oldest and most powerful secret society—has had its drawbacks. A historian at the Smithsonian, Tess enjoys her quiet life. So when the Grand Master tells her not only is the society in danger, but Tess must marry two very different, very sexy men, she knows her calm existence has come to an end.
Isaiah Jefferson makes his living writing thrillers that keep readers on the edge of their seats, but he never expected to become part of a real-life plot. When the Grand Master calls him to the altar to meet his spouses, he's tasked with solving a mystery...one that turns out to be just as dangerous as anything he could ever write.
The future of the Trinity Masters hangs in the balance, but there is hope if this new, fragile triad can solve the centuries-old mystery. The founders of their society kept a secret—a piece of information so deadly, it could be used to protect them in times of crisis. But Tess, Isaiah, and their dangerous third aren't the only ones following the trail. And their enemies are prepared to kill for the secrets they're uncovering.
Books in the Trinity Masters series:
1. Elemental Pleasure
2. Primal Passion
3. Scorching Desire
4. Forbidden Legacy
5. Hidden Devotion
6. Elegant Seduction
7. Secret Scandal
8. Delicate Ties
9. Beloved Sacrifice
10. Masterful Truth
FictionMysteryRomanceSuspense

More about Mari Carr
Masterful Truth
Copy and paste the code into your website.
New here? Learn how to read digital books for free