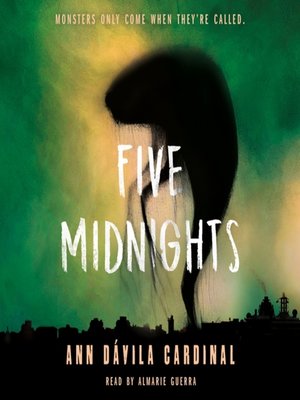 "Almarie Guerra is wonderfully cast to narrate Cardinal's fabulously creepy murder mystery...Guerra's well-paced performance, including her perfect Spanish pronunciation, will keep listeners engaged with the suspenseful narrative, which is equal parts crime investigation, macabre ghost story, and slow-burn romance. For thrills and chills in a tropical setting, this is the ideal pick." — AudioFile Magazine, Earphones Award winner
Ann Dávila Cardinal's Five Midnights is a "wickedly thrilling" (William Alexander) audiobook based on the el Cuco myth set against the backdrop of modern day Puerto Rico.
Five friends cursed. Five deadly fates. Five nights of retribución.
If Lupe Dávila and Javier Utierre can survive each other's company, together they can solve a series of grisly murders sweeping though Puerto Rico. But the clues lead them out of the real world and into the realm of myths and legends. And if they want to catch the killer, they'll have to step into the shadows to see what's lurking there—murderer, or monster?
"A frightening, fast-paced thriller." —Julianna Baggott, Alex Award-winning author of Pure