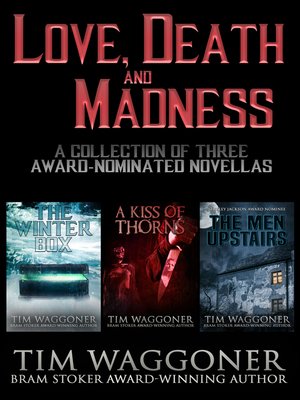 Available for the first time together, three of Tim Waggoner's award-nominated novellas of horror fiction.

It's Todd and Heather's twenty-first anniversary. A blizzard rages outside their home, but it's far colder inside. Their marriage is falling apart, the love they once shared gone, in its place only bitter resentment. As the night wears on, strange things start to happen in their house—bad things. If they can work together, they might find a way to survive until morning...but only if they don't open the Winter Box.

A KISS OF THORNS

Lonny lost his beloved sister Delia thirty years ago. Since then, he's sacrificed many lives in order to return her to the world of the living, but without success.

His next target is Julia, a young women with a unfulfilled marriage and a passion for '80s horror films. She will soon discover that not only is real life more complicated than the movies, it's far more terrifying.

Finalist of the 2012 Shirley Jackson Award for Best Novella

He finds her crying in the lobby of a movie theater and takes her home to his apartment, a strange, beautiful woman with no last name, a mysterious past, and a powerful sexual allure. He wants her, and she wants him. There's only one problem: the Men Upstairs. She used to belong to them—and they'll do anything to get her back.