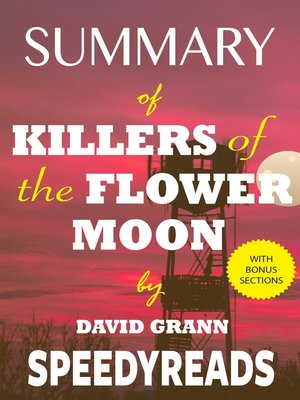 Summary of Killers of the Flower Moon

Summary of Killers of the Flower Moon

On the 24th of May 1921, Mollie Burkhart of the Osage settlement town of Gray Horse, Oklahoma, began dreading the worst about her elder sister, Anna Brown. Anna had vanished three days earlier, which wasn't uncharacteristic of her since she disappeared at times. Their sister, Minnie, had passed away three years ago due to a mysterious illness that the doctors had not been able to explain.

By the year 1923, the number of killed Osages had reached twenty-four. A young director, J. Edgar Hoover, started obsessing over the case of the Osage killings and called on to a former Texas Ranger named Tom White to investigate and solve the mystery.

Summary of Killers of the Flower Moon
Copy and paste the code into your website.
New here? Learn how to read digital books for free