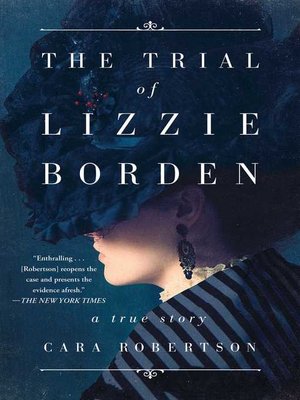 The Trial of Lizzie Borden

Biography & AutobiographySociologyTrue CrimeNonfiction
In Cara Robertson's "enthralling new book," The Trial of Lizzie Borden, "the reader is to serve as judge and jury" (The New York Times). Based on twenty years of research and recently unearthed evidence, this true crime and legal history is the "definitive account to date of one of America's most notorious and enduring murder mysteries" (Publishers Weekly, starred review).
When Andrew and Abby Borden were brutally hacked to death in Fall River, Massachusetts, in August 1892, the arrest of the couple's younger daughter Lizzie turned the case into international news and her murder trial into a spectacle unparalleled in American history. Reporters flocked to the scene. Well-known columnists took up conspicuous seats in the courtroom. The defendant was relentlessly scrutinized for signs of guilt or innocence. Everyone—rich and poor, suffragists and social conservatives, legal scholars and laypeople—had an opinion about Lizzie Borden's guilt or innocence. Was she a cold-blooded murderess or an unjustly persecuted lady? Did she or didn't she?

An essential piece of American mythology, the popular fascination with the Borden murders has endured for more than one hundred years. Told and retold in every conceivable genre, the murders have secured a place in the American pantheon of mythic horror. In contrast, "Cara Robertson presents the story with the thoroughness one expects from an attorney...Fans of crime novels will love it" (Kirkus Reviews). Based on transcripts of the Borden legal proceedings, contemporary newspaper accounts, unpublished local accounts, and recently unearthed letters from Lizzie herself, The Trial of Lizzie Borden is "a fast-paced, page-turning read" (Booklist, starred review) that offers a window into America in the Gilded Age. This "remarkable" (Bustle) book "should be at the top of your reading list" (PopSugar).
Biography & AutobiographySociologyTrue CrimeNonfiction

Cara Robertson began researching the Borden case as a Harvard undergraduate in 1990. She holds a PhD from Oxford University and a JD from Stanford Law School. She clerked at the Supreme Court of the United States, served as a legal adviser to the ...

More about Cara Robertson
The Trial of Lizzie Borden
Copy and paste the code into your website.
New here? Learn how to read digital books for free