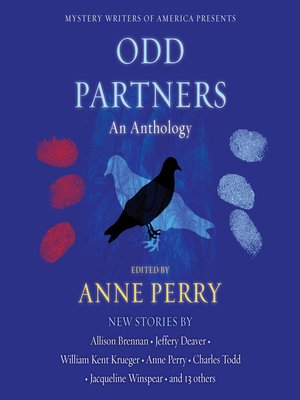 FictionMysteryShort StoriesThriller
Unlikely pairs join forces to crack a slew of intriguing cases in an anthology edited by New York Times bestselling author Anne Perry, featuring original stories by Jacqueline Winspear, Jeffery Deaver, Allison Brennan, Charles Todd, and many more, including Perry herself.
Throughout the annals of fiction, there have been many celebrated detective teams: Sherlock Holmes and John Watson. Nick and Nora Charles. Hercule Poirot and Arthur Hastings. Thomas and Charlotte Pitt. That last pair is the creation of beloved mystery writer Anne Perry, who, as the editor of Odd Partners and in conjunction with Mystery Writers of America, has enlisted some of today's best mystery writers to craft all-new stories about unlikely duos who join forces—sometimes unwillingly—to solve beguiling whodunits.
From Perry's own entry, in which an English sergeant and his German counterpart set out to find a missing soldier during World War I, to a psychological tale of an airplane passenger who wakes up unsure of who he is and must enlist his fellow passengers to help him remember, to a historical mystery about a misguided witch-hunt and the unlikely couple that brings it down, each story deals in the wonderful complexities of human interactions. And not just human interactions: Honey bees avenge the death of their beekeeper, a wandering cat brings home clues to a murder, and a gray wolf and a fly fisherman in the Minnesota woods try to protect their land from a brash billionaire.
Featuring work by New York Times bestselling authors, Edgar Award winners, and up-and-coming members of the Mystery Writers of America, these tales of friends, enemies, and pairs who lie somewhere in the middle will satisfy every type of mystery reader. With each author's signature brand of suspense, these stories give new meaning to the word "teamwork."
Audio Contents:
Introduction by Anne Perry, read by Anne Perry
"Reconciliation" by Anne Perry, read by Simon Prebble
"The Nature of the Beast" by William Kent Krueger, read by Ray Porter
"Sad Onions: A Hap and Leonard Story" by Joe R. Lansdale, read by Christopher Ryan Grant
"The Wagatha Labsy Secret Dogtective Alliance: A Dog Noir Story" by Jacqueline Winspear, read by Macleod Andrews
"Glock, Paper, Scissors" by Shelley Costa, read by Lorna Raver
"Blood Money: An Inspector Rutledge Story" by Charles Todd, read by Simon Prebble
"The Violins Played Before Junshan" by Lou Kemp, read by Edoardo Ballerini
"What Ever Happened to Lorna Winters?" by Lisa Morton, read by Macleod Andrews
"Oglethorpe's Camera" by Claire Ortalda, read by Amy Landon
"The Last Game" by Robert Dugoni, read by Edoardo Ballerini
"NO 11 SQUATER" by Adele Polomski, read by Lorna Raver
"A Cold Spell" by Mark Thielman, read by Janina Edwards
"What Would Nora Do?" by Georgia Jeffries, read by Amy Landon
"Hector's Bees" by Amanda Witt, read by Janina Edwards
"Georgia in the Wind" by William Frank, read by Ray Porter
"From Four till Late: A Nick Travers Story" by Ace Atkins, read by Macleod Andrews
"Bite out of Crime" by Allison Brennan, read by Amy Landon
"Songbird Blues" by Stephen Ross, read by Edoardo Ballerini
"Security" by Jeffery Deaver, read by Ray Porter
FictionMysteryShort StoriesThriller

Mystery Writers of America is the premier organization for mystery writers, professionals allied to the crime-writing field, aspiring crime writers, and those who are devoted to the genre. MWA is dedicated to promoting higher regard for crime writ...

More about Mystery Writers of America

Odd Partners
Copy and paste the code into your website.
New here? Learn how to read digital books for free