ebook ∣ His Personal Thoughts as Recorded by Martin Bormann 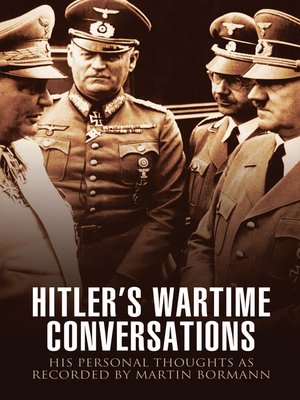 A rare glimpse into the mind of the Nazi leader, as recorded by his personal secretary.

Much of the documentation surrounding Adolf Hitler was lost or deliberately destroyed in the chaos of World War II's end. Yet some records were preserved for history. After dinner at the Wolf's Lair, it was Hitler's custom to retire to his private quarters, where he and his entourage often listened to gramophone records of Beethoven symphonies or selections from Wagner as Hitler would hold forth with lengthy and rambling monologues touching on a wide variety of subjects. It was Martin Bormann who decided to commission a recording of Hitler's words for posterity.

Ranging from1941 to 1944, these conversations touch upon a wide range of subjects, with statements both shocking and mundane—providing a unique up-close look at the mind and personality of this still-enigmatic twentieth-century figure.