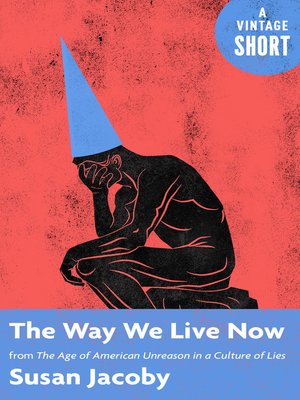 The Way We Live Now

HistoryPoliticsSociologyNonfiction
In this selection from her searing cultural history of the last half century, Susan Jacoby chronicles the menacing surge of anti-rationalism in contemporary American life and the degradation of public speech in presidential rhetoric, radio broadcast, television, and internet media where homogenized language and thought reinforce each other in circular fashion.
At today's critical political juncture, in which boastful ignorance has infected public discourse at the highest levels of government and throughout ordinary social media, this impassioned, tough-minded work challenges Americans to face the painful truth about what the flight from intellectualism, facts, and truth have cost us as individuals and as a nation.
A Vintage Shorts Selection. An ebook short.
HistoryPoliticsSociologyNonfiction

SUSAN JACOBY is the author of twelve previous books, most recently Strange Gods, Never Say Die, The Great Agnostic: Robert Ingersoll and American Freethought, The Age of American Unreason, Alger Hiss and the Battle for History, Freethinkers: A His...

More about Susan Jacoby
The Way We Live Now
Copy and paste the code into your website.
New here? Learn how to read digital books for free