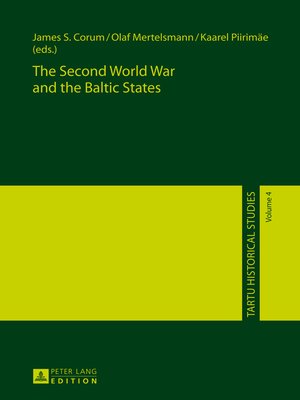 The Second World War and the Baltic States

HistoryNonfiction
This volume places the history of the Second World War and the Baltic states into a multidisciplinary and international perspective. It includes contributions from the fields of diplomacy, strategy, military operations, intelligence and propaganda. It presents not only a multi-layered interpretation of a region affected by total war, but also reveals a great deal about the nature of that conflict. It discusses the attitudes of the great powers towards small states, the nature of military operations around the advent of mechanization and close air support, and techniques of population control and of steering opinion in the era of ideological regimes. Contributions on these topics add to our understanding of the Second World War as a pivotal event in the history of Europe in the 20th century.
HistoryNonfiction

James S. Corum, Lt. Col. USAR ret., is Dean of the Baltic Defence College in Tartu (Estonia). He studied at Oxford University and holds a PhD in History from Queen's University in Kingston (Canada). Olaf Mertelsmann is Associate Professor in Conte...

More about James S. Corum
The Second World War and the Baltic States
Copy and paste the code into your website.
New here? Learn how to read digital books for free