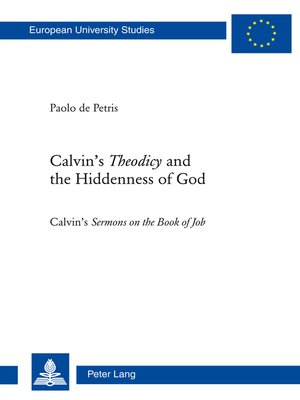 Calvins «Theodicy»and the Hiddenness of God

PhilosophySociologyNonfiction
Calvin's Theodicy has been substantially ignored or simply negated until now on the assumption that the issues raised by the modern problem of evil and Calvin's discussion of providence and evil would be different. The unspoken premise underlying this conviction is that theodicy is a modern problem, since earlier formulations in no way attempted to justify God's actions.
This book goes decisively in the opposite direction. It aims to understand the core of Calvin's Theodicy and to demonstrate that one of the most important reasons that prompted Calvin to preach for almost 2 years 159 Sermons on the Book of Job was to «vindicate» God's justice by demonstrating the meaningfulness of God's activity in human life.
After examining the status of the recent research on Calvin's Theodicy, this work studies the steps that led the French reformer to his insights and the drafting of the Sermons. Further, it studies the juridical framework of Calvin's defence of the justice of God. Finally, the author analyses the answers given by Calvin to the problem of human anguish: Why do innocent people suffer? In what way one can still believe in an Omnipotent God?
PhilosophySociologyNonfiction

Paolo de Petris worked as a Lawyer and Honorary Judge in Italy for 15 years. After studying Theology at the Waldenser Faculty in Rome, in 2008 he obtained a PhD at McGill University in Montreal. He is currently Minister in a Reformed church in Swi...

More about Paolo De Petris
Calvins «Theodicy»and the Hiddenness of God
Copy and paste the code into your website.
New here? Learn how to read digital books for free