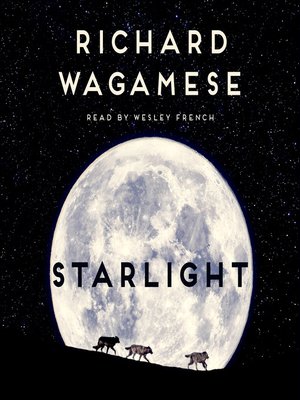 View more libraries...
NATIONAL BESTSELLER
The final novel from Richard Wagamese, the bestselling and beloved author of Indian Horse and Medicine Walk, centres on an abused woman on the run who finds refuge on a farm owned by an Indigenous man with wounds of his own. A profoundly moving novel about the redemptive power of love, mercy, and compassion—and the land's ability to heal us.
Frank Starlight has long settled into a quiet life working his remote farm, but his contemplative existence comes to an abrupt end with the arrival of Emmy, who has committed a desperate act so she and her child can escape a harrowing life of violence. Starlight takes in Emmy and her daughter to help them get back on their feet, and this accidental family eventually grows into a real one. But Emmy's abusive ex isn't content to just let her go. He wants revenge and is determined to hunt her down.
Starlight was unfinished at the time of Richard Wagamese's death, yet every page radiates with his masterful storytelling, intense humanism, and insights that are as hard-earned as they are beautiful. With astonishing scenes set in the rugged backcountry of the B.C. Interior, and characters whose scars cut deep even as their journey toward healing and forgiveness lifts us, Starlight is a last gift to readers from a writer who believed in the power of stories to save us.