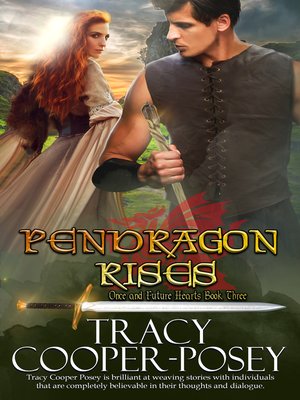 Once and Future Hearts

She is invisible to everyone but the blind man...

Anwen is the least favored companion to Lady Igraine, the Duchess of Cornwall. No man will marry her, for she is old and plain. Instead, she teaches Igraine's children to read.

Steffan of Durnovaria was once a celebrated warrior in the Duke of Cornwall's army, a friend to Prince Uther, the High King's brother, and destined for greatness, until a Saxon war hammer stole his sight and destroyed his life.

To deflect Steffan's anger from the warriors around him, Igraine directs him to help Anwen teach her daughters. The assignment brings him no happiness and terrifies Anwen, who has never spoken to a man directly in her life.

When the new High King, Uther, meets Igraine for the first time and becomes obsessed with her, Anwen and Steffan are drawn into a web of lies and deceit that could destroy Britain's fragile peace.

This novel is part of the ancient historical romance series, Once and Future Hearts, set in Britain during the time of King Arthur.

Readers have described Tracy Cooper-Posey as "a superb story teller" and her ancient historical romances as "written art". Get your copy of Pendragon Rises today!
__

Praise for the Once And Future Hearts series

It takes me back to the magic I felt when reading Mary Stewart's stories of Merlin. Tracy Cooper-Posey has written another winner!

As a long time, self proclaimed Arthurian Legend junkie I couldn't wait to dive into Tracy Cooper Posey's new series. Tracy once again proves to be a master story teller as she weaves the delicate threads of this beloved legend into her own.

Oh my goodness. Of course I was not sure what to expect with this but what I got was a wonderful story set in the time just before King Arthur. Invading Saxons, Romans, Kings, princesses, mysteries, Merlin, and romance? Wonderful beginning to a new series and I cannot wait to read more.

I also love the fact that her female characters are definitely not boring, whiny or TSTL.

Tracy Cooper Posey is brilliant at weaving stories with individuals that are completely believable in their thoughts and dialogue.
___

Tracy Cooper-Posey is a #1 Best Selling Author. She writes romantic suspense, historical, paranormal and science fiction romance. She has published over 90 novels since 1999, been nominated for five CAPAs including Favourite Author, and won the Emma Darcy Award.

She turned to indie publishing in 2011. Her indie titles have been nominated four times for Book Of The Year. Tracy won the award in 2012, and a SFR Galaxy Award in 2016 for "Most Intriguing Philosophical/Social Science Questions in Galaxybuilding" She has been a national magazine editor and for a decade she taught romance writing at MacEwan University.

She is addicted to Irish Breakfast tea and chocolate, sometimes taken together. In her spare time she enjoys history, Sherlock Holmes, science fiction and ignoring her treadmill. An Australian Canadian, she lives in Edmonton, Canada with her husband, a former professional wrestler, where she moved in 1996 after meeting him on-line.

Once and Future Hearts