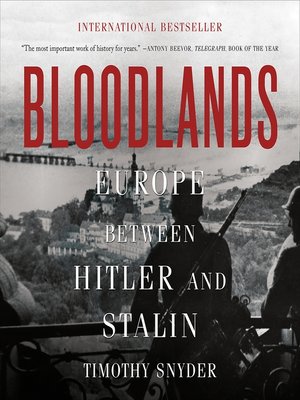 Europe between Hitler and Stalin

Americans call the Second World War "The Good War." But before it even began, America's wartime ally Josef Stalin had killed millions of his own citizens—and kept killing them during and after the war. Before Hitler was finally defeated, he had murdered six million Jews and nearly as many other Europeans. At war's end, both the German and the Soviet killing sites fell behind the iron curtain, leaving the history of mass killing in darkness.

Bloodlands is a new kind of European history, presenting the mass murders committed by the Nazi and Stalinist regimes as two aspects of a single history, in the time and place where they occurred: between Germany and Russia, when Hitler and Stalin both held power. Assiduously researched, deeply humane, and utterly definitive, Bloodlands will be required reading for anyone seeking to understand the central tragedy of modern history.

Bloodlands won twelve awards, was named to twelve best book-of-the-year lists, has been translated into more than thirty languages, and was a bestseller in six countries.

Timothy Snyder, the Levin Professor of History at Yale University, is the award–winning author of the books of history, including the New York Times bestseller Black Earth.

More about Timothy Snyder
Bloodlands
Copy and paste the code into your website.
New here? Learn how to read digital books for free