Dawn of the Code War 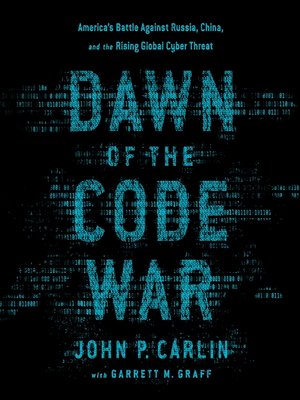 This firsthand account of the fight to protect America from foreign hackers warns of the unprecedented danger that awaits us in the era of the internet of things, unless we can change our technology culture.

With each passing year, the internet-linked attacks on America's interests have grown in both frequency and severity. We've seen North Korea's retaliatory hack of Sony Pictures, China's large-scale industrial espionage against American companies, Russia's 2016 propaganda campaign, and quite a lot more. The cyber war is upon us.

As the former Assistant Attorney General and Chief of Staff to FBI Director Robert Mueller, John Carlin has spent fifteen years on the frontlines of America's ongoing cyber war with its enemies. In this dramatic book, he tells the story of his years-long secret battle to keep America safe, and warns us of the perils that await us as we embrace the latest digital novelties-smart appliances, artificial intelligence, self-driving cars-with little regard for how our enemies might compromise them. The potential targets for our enemies are multiplying: our electrical grid, our companies, our information sources, our satellites. As each sector of the economy goes digital, a new vulnerability is exposed.

The Internet of Broken Things makes the urgent case that we need to start innovating more responsibly. As a fleet of web-connected cars and pacemakers rolls off the assembly lines, the potential for danger is overwhelming. We must see and correct these flaws before our enemies exploit them.