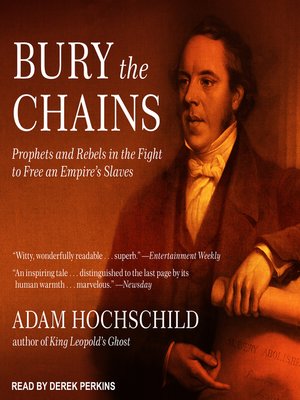 Prophets and Rebels in the Fight to Free an Empire's Slaves

HistoryPoliticsSociologyNonfiction
From the author of the widely acclaimed King Leopold's Ghost comes the taut, gripping account of one of the most brilliantly organized social justice campaigns in history-the fight to free the slaves of the British Empire. In early 1787, twelve men-a printer, a lawyer, a clergyman, and others united by their hatred of slavery-came together in a London printing shop and began a remarkable grass-roots movement, battling for the rights of people on another continent. Masterfully stoking public opinion, the movement's leaders pioneered a variety of techniques that have been adopted by citizens' movements ever since, from consumer boycotts to wall posters and lapel buttons to celebrity endorsements. A deft chronicle of this groundbreaking antislavery crusade and its powerful enemies, Bury the Chains gives a little-celebrated human rights watershed its due at last.
HistoryPoliticsSociologyNonfiction

Adam Hochschild is the author of a number of books, including Half the Way Home, The Mirror at Midnight, and The Unquiet Ghost. Three of his books, including King Leopold's Ghost, have been named Notable Books of the Year by the New York Times Boo...

More about Adam Hochschild
Bury the Chains
Copy and paste the code into your website.
New here? Learn how to read digital books for free