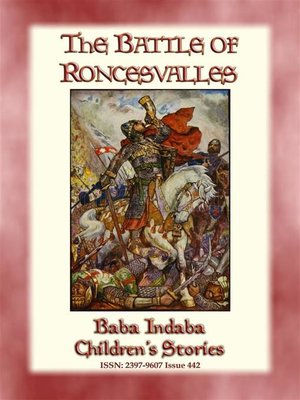 THE BATTLE OF RONCEVALLES--A Carolingian Legend

The Battle of Roncevaux Pass (Roncesvalles in Spanish) in 778AD saw a large force of Basques ambush a part of Charlemagne's army in Roncevaux Pass, a high mountain pass in the Pyrenees on the present border between France and Spain, after his invasion of the Iberian Peninsula.

As the Franks retreated across the Pyrenees back to France, the rearguard of Frankish lords were cut off, but they stood their ground.
During the battle, Roland draws his horn and blows in the belief that the Emperor Charlemagne would hear the cry for help and send a relieving army.

What happened next? Did the blowing of the horn result in relief for the besieged knights? How did everything turn out in the end? Well, you'll have to download and read the story to find out for yourself.

NOTE: The battle, which actually happened, elevated the relatively obscure Roland and the paladins into legend, becoming the quintessential role model for knights and also greatly influencing the code of chivalry in the Middle Ages. There are numerous written works about the battle, some of which change and exaggerate events. The battle is recounted in the 11th century The Song of Roland, the oldest surviving major work of French literature.

THE BATTLE OF RONCEVALLES--A Carolingian Legend
Copy and paste the code into your website.
New here? Learn how to read digital books for free