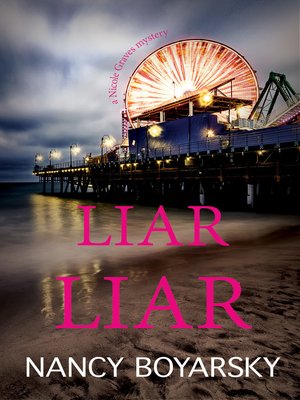 FictionMysterySuspenseThriller
The truth is elusive in Liar Liar.
"Tough and likeable" (Foreword Reviews) Nicole Graves finds herself in the crosshairs when she reluctantly agrees to babysit a witness in a high-profile rape trial. Mary Ellen Barnes is suing her university's star quarterback for rape when the authorities won't act. In the court of public opinion, Mary Ellen appears to be the quintessential, pious, good girl. But her lies and mysterious comings and goings lead Nicole to suspect that she’s not what she seems.
It isn't just Mary Ellen who's acting suspiciously. No one wants to own up to the truth in Liar Liar, not even Nicole, whose fiance; begs her not to look into the case. But when the witness goes missing during the trial, Nicole is caught up in a tangle of lies that turns deadly. After the investigator assigned to the case fails to do his job, Nicole is determined to find the killer on her own, no matter the risks.
"Boyarsky's imagination serves up a court case that plays with expectations during an era where we push to believe women, resulting in some real bad baddies whom it feels good to root against." -Foreword Reviews
"Nicole Graves is the best fictional sleuth to come down the pike since Sue Grafton's Kinsey Millhone." -Laura Levine, author of the popular Jaine Austen Mysteries
"Liar Liar creates exquisite tension..."-Midwest Book Review
FictionMysterySuspenseThriller

Nancy Boyarsky is the bestselling author of the award-winning Nicole Graves Mysteries.Reviews compared The Swap to the mysteries of Mary Higgins Clark and praised Nancy for contributing to the "women-driven mystery field with panache" (Foreword Re...

More about Nancy Boyarsky
Liar Liar
Copy and paste the code into your website.
New here? Learn how to read digital books for free